Sanctum, third place for my 2011 Game of the Year picks here at Levelsave.com (I’ve been here coming up on two years already?) by Coffee Stain Studios was a beautifully executed cross-genre experience. There has been some news of Sanctum 2 being released to both PC and console platforms, and I’ve gotten my hands on a preview build of the game. This is a game wherein you create a maze and place turrets to kill creeps, and then enter first person mode in order to help your turrets in their task. It’s frenetic and fun, and needs some twitch reaction to keep the Lumes (the creeps are called Lumes in the Sanctum universe) at bay.

Is Sanctum 2 a revolution in genre defying gameplay like the first? Is it more of the same? Are there major changes or deviations? It is worth buying if you already have the first? My answer to all of those questions is a very loud “YES!” (Well, except for the first one. I think we’ve seen tower defence rolled up in various packages by now.) 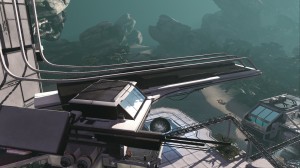 The first thing I notice as I boot up the game is the sense of environment in it. Sanctum was a good-looking and novel experience, but the sequel makes you feel as if you are actually travelling through the world as you progress through the levels. The title screen has a panorama of the world, the characters all have this uniquely futuristic mercenary look and really belong in the world, there is a story which is propelled by comic book-style cutscenes, the levels themselves have people cowering in fear and moaning for help as they cower behind the core, the actual military are placed on the level, though they aren’t much more than a single bite for the powerful creeps they are facing. The first game proved that these things which transport you into the world you are defending are not necessary, but they certainly do make the experience more compelling.

As I enter the game and start building my maze, the biggest difference in actual gameplay is the little bitty walls. I don’t know what happened to the funding for the people hiring the mercs, but the first game had us placing towering block that I could stand on and not ever be touched by the gigantic enemies barreling through. This iteration has walls so low you and peek over them while standing flat-footed to see the action beyond. What this means is that the player is brought way down to the level of the creeps so that the enemy mobs can just walk up to the wall and smash your feet, dealing damage and throwing the PC backwards to the ground where even more mobs might be waiting for their turn. This creates a more twitch-shooter feel as the player runs around and avoids damage as well as trying to score huge hits on enemy weakspots. 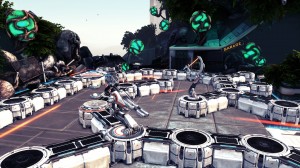 The weapon loadout system has changed as well. If you played the first game, you will remember upgrading your weapons with the same pool of points with which you upgrade and place towers. This system was scrapped and replaced with a weapon selection screen at the beginning of each level. You can choose two weapons and you are stuck with those for the level. This sounds really stupid at face value, but it’s better and I’ll tell you why. Your character levels up as you play through stages, unlocking various weapons and perks, which didn’t hap[pen in the first game. The assault rifle (my weapon of choice in Sanctum 2) if very, very powerful with some of the perks you can pair it with. Imagine that your fully-automatic weapon can do 100% damage every third hit as a bonus. This effectively increases your Lume-shredding capacity by another 33%. There are tons of combinations like this which makes customizing the loadout interesting and keeps characters differentiated from each other within a multiplayer game. The level up system assures that you are guaranteed to unlock more guns, perks, and even towers as you play and, coupled with the unlocking levels as you complete them, that lends an over-arching feel of progression throughout the game. You will need everything you can muster to defeat some of the gigantic boss mobs which can actually destroy your maze with their huge troll-like arms, paving the way for swarms of creeps to just roll over your core as you attempt to deal with the muscle-bound health meter on legs. 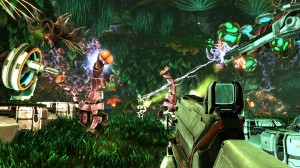 It must be said that I love that their main characters, the top skin selections (of which there are four,) are both strong, bad-ass women. They don’t suffer any of the sexual weirdness that often happens to female leads, they just happen to be sisters fighting the same battle as the other characters. It feels good to play as someone whom I see as an equal to Jade (Beyond Good and Evil) in terms of character integrity and bravado. I know this view is slightly skewed, since the story of Sanctum 2 is not necessarily involved or emotionally fraught, usually consisting of lines like “They’re getting into the base, we need to stop them!” Never the less, they aren’t victimized by their own people as a means of motivation like so many other female leads, and that is refreshing.

The matchmaking works very well. When you start up a game, you can choose if you want to keep the game closed, open it up to friends, or let any old random with a Quick Connect button into your instance. It’s fast, easy, and streamlined. I haven’t seen any terrible problems with latency or disconnects, so I must assume that there aren’t any. There are a few bugs which will need to get ironed out before launch, but I feel that it’s very doable in the time they’ve given themselves before launch.

All in all, I am looking forward to seeing this game released on PC, XBLA, and PSN.  Sanctum 2 will be available on these platforms this summer for $14.99 USD or 1200 Microsoft Points.